This is one of those terms you’ve heard before, but might not have ever gotten to fully understand. It is what it sounds like — thoughts out of tune. More particularly, it is the feeling we get when our thoughts, beliefs and morals clash with our actions. It’s that uncomfortable feeling we have after we buy something we really couldn’t afford, or do something we know we shouldn’t do.

As adaptable beings we dispatch that feeling with justifications. “I really need that new [insert toy name here] even though I ain’t got the cash, and here’s why…” Aesop had a good fable that fit this too. A fox sees some grapes hanging too high to reach. After trying to get them and failing, he struts off arguing to himself that they must not have been worth eating. It’s where the old “sour grapes” saying comes from. We are also prone to justify away the dissonance we would otherwise feel when we take a shortcut we know we should not take. 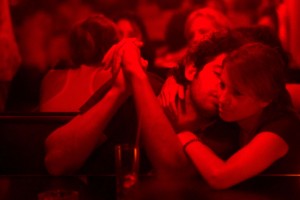 In journalism justifications like that pop up frequently to argue why something considered unethical should be seen as okay “under the circumstances.” You’ve heard them: “magazines are different from newspapers” or “the cover is an advertisement” to explain away a breach of journalism ethics. Our ethics should determine our actions, of course. But there seems to be an unending stream of ways journalists justify letting their actions determine their ethics. Neither market forces, ease nor style should trump ethics in the images we produce or how we use them. If we act like we are delivering truthful information, then we must follow through on that promise.

It happens among photojournalists more often than we might think. We pay a lot of attention to the egregious breaches of our ethics: major alterations, serious cases of reenactment or direction of what would appear to be a spontaneous moment. But as professionals who document reality we need to stay aware of how we might let convenience, competition, drive for a style or a wish for the approval of an editor or producer affect our work. This can come down to many of the mundane tasks we perform in our work, including — to pick only one example — things like toning an image.

There’s a difference between choosing a moment of perfect light and color that actually existed and fixing dull light to make it more dramatic in a photo. We like dramatic images. They attract reader interest, appeal to editors and feel satisfying to us. But isn’t the satisfaction and pride much stronger when we took the time and energy to seek out the light and color rather than pumping it up with software tools? And isn’t it simply more honest?

Our talent — the one that separates us from all the other flavors of photographer — is that we capture reality quickly and delicately and without influence. It is an incredible skill that takes great attention and effort to develop. We take pride in our ability to think and act quickly and to know the story as we are seeing it happen. We slice telling moments out of the unstoppable flow of time, and when we miss, we miss.

…but when the light is flat and color anemic, we must just watch more closely for the moment rather than inventing light that wasn’t there. © Kevin Moloney

Photography, Henri Cartier-Bresson said, is “…an immediate sketch, done with intuition, and you can’t correct it. If you have to correct it, it’s the next picture. Life is very fluid, and, well, sometimes the picture has disappeared and there’s nothing you can do. You can’t tell the person, ‘oh, please smile again, do that gesture again.’ Life is once, forever.”

Having made all that effort to catch the decisive moment without any before- or after-the-fact fixing, why would we let any overrated sense of market pressure discredit that work? Look again at Cartier-Bresson’s images in which the moment and geometry are so perfect that trivial stylistics like color and contrast don’t matter at all.

And if we look, flat light has its advantages, such as providing layer upon layer of detail. © Kevin Moloney

I am not making an excuse to shroud dull images in a cloak of ethics. Our challenge is to find the impressive image in any circumstance — no matter how colorless or flat in light — without needing to embellish it after the fact. We do that by skillfully getting to the right place at the right time to capture true storytelling images and minimizing our influence on a scene.

If any of our actions need a justification to exempt them from our core ethical standards, then those actions need to be reconsidered. It is our ethics that must determine our actions, not the converse.

For an entertaining and disturbing look at cognitive dissonance at work in the cable TV world, have a listen to radio producer Rebecca Hertz’ piece on how process trumped ethics in the production of a reality TV show, for NPR’s Snap Judgement. In the show segment she compares the experience of the producers and participants to the Stanford Prison Experiment of the 1970s.