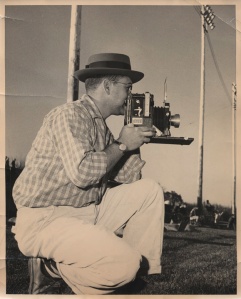 My own lifelong professor: My father, Paul F. Moloney, photographs a Colorado State College (now University of Northern Colorado) football game from the sidelines of Jackson Field in Greeley, Colo., in the fall of 1957. He holds a Speed Graphic press camera. (Photo/Bob Waters)

I grew up at a small newspaper. On the alley a dozen ink- and grease-covered windows and loading doors were habitually left open to let out the Linotype air. Pressmen stood smoking cigarettes in those doors waiting for rolls of newsprint and waving to me as I entered the back door with my father.

To get from there to the newsroom where my dad worked required running a gauntlet of Brylcreemed, chain-smoking typesetters and their lead-belching machines. Once at his desk I would push aside stacks of marked-up copy on trimmed newsprint sheets so I could play with his four-colored editing pen. High, yellowish walls amplified the clatter of typewriters.

On one of those days at the paper my father asked if I’d like to see something amazing. He took my hand and escorted me deep into the old building where the press usually rumbled. One of the ancient machine’s mammoth gears had split in two. I marveled at its bulk and at the power it must have taken to drive it. It was three times the size of my six-year-old frame and a hundred times my weight.

From that day journalism stopped being simply my father’s job and became a marvel to me. The giant broken gear from a turn-of-the-century press told me it was a big endeavor. The camaraderie of the newsroom showed me it was a shared one.

My memories of my father on the job formed my own view of the good and bad in the world. I understood better what had taken him to the scene of a collision between a freight train and a school bus that killed 20 children, and how he, as a young father, suffered from that sight. Knowing the importance of what he did also helped me see why he needed to photograph the aftermath of a murder-suicide that claimed the life of my junior high friend.

His work as a community journalist was rarely about tragedy, though. More common in my youth were sunny autumn days next to him on the sideline of a college football game. I stood straight-backed near the gridiron giants, proud to be so special. Around each Fourth of July I’d hang on the rails of the rodeo arena fence near him as the bulls and broncos tossed their riders at my feet. 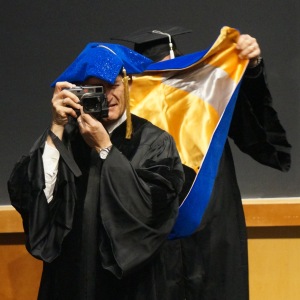 The Perfesser gets his doctoral hood (Photo by Ira G. Liss)

In high school I picked up a camera for myself. I treasure the cold autumn Friday nights I had on the sidelines, sharing a bag of popcorn and action photography with my father. I could see no other career path ahead.

My first stop upon entering the University of Colorado was the office of the award-winning yearbook. That book and its staff so impressed me while at high school that I applied to only one university.

The Coloradan also gave me my opportunity to be a big man on a large campus as editor. During my years there our staff weathered censorship controversies and budget crises while we continued to win national design awards. We unflinchingly documented campus life, developed skills, and argued for our rights as journalists. I learned as much from those experiences as I had from my teachers.

After college I went straight into the newspaper world I knew from my youth. Gone already then was the racket of Linotypes, typewriters and wire machines. But in the quiet modern newsrooms there was still a sense of big, shared endeavor.

In 1996 I returned to the University of Colorado as a part-time instructor, teaching the entirety of the photojournalism program there. I’ve helped my students weather censorship and libel controversies of their own and learn from those experiences as much as I hope they learn from their teachers.

I’ve watched my students move on to success, working everywhere from small papers to large Web sites and AP’s foreign staff. They are now winning World Press, Pictures of the Year, Magazine Photographer of the Year, Alicia Patterson Fellowships and other international honors. In 2008 they nominated me for the National Press Photographers Association’s Robin F. Garland Education Award for my teaching efforts. And I won.

I once thought there would be no bigger endeavor for me than working as a photojournalist. It continues to be my vocation and principal work. Now one big endeavor has been joined by another — the shared one of teaching young journalists.

Kevin Moloney is a veteran photojournalist with three staff jobs and decades as a freelancer under his camera strap. For 21 years he taught three courses in photojournalism at the University of Colorado at Boulder between shooting more than 960 jobs for the New York Times, and hundreds more for the Chicago Tribune, USA Today, US News & World Report and many other international publications. Kevin holds a Master of Arts in Digital Media Studies from the University of Denver and a Ph.D. in Technology, Media and Society from the University of Colorado’s interdisciplinary ATLAS Institute. He is now a professor of transmedia journalism at the Center for Emerging Media Design and Development at Ball State University.