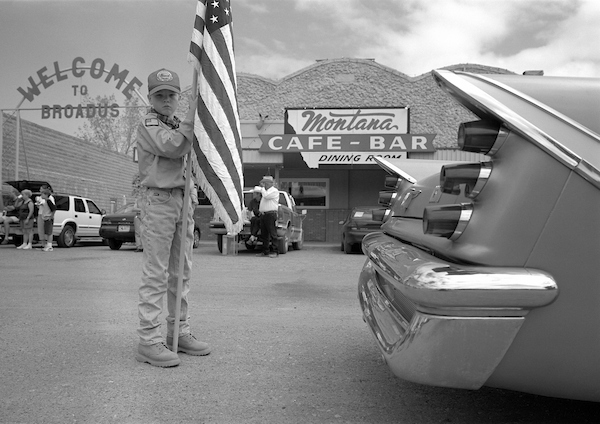 A young Boy Scout parades in the annual July 4 parade in Broadus, Montana, 2000. Archival silver print, personally darkroom printed, matted and signed on the mat by the photographer.

I’m proud to have a print in A Photo A Day’s (APAD) auction to fund their valuable “Backyard Storytelling” documentary photography grant.

In an era when funding long-term personal projects is difficult at best, this fund provides for important work that would otherwise be skipped, cut short or denied the public traction it needs to inform the world. The $4,000 grant funds work within 350 miles (one tank of gas) of the photographer’s home. In past years the grant has received more than 150 entries from around the world, and winners produce insightful and genre-challenging work.

Click on the image above to bid on my personally-hard-printed archival silver print (that means darkroom, yep). It’s a limited edition of 25, matted and signed and ready for the wall. But there are many many interesting works to be had there, from a print of John Lennon by LIFE magazine photographer Bill Eppridge, to former student Chip Litherland, colleague Ross Taylor dozens of others.

Please bid on something today.

Ode to the Underwood: In Praise of the Mechanics of Creativity

As I sit and type this gently on the elegant and thin modern keyboard of my computer, I find myself wishing for the catharsis of a mechanical typewriter.

Behind me, on the other end of my office, is my grandfather’s 1923 Underwood upright. As a kid I pounded on it until all the keys bunched up in a wad. I rolled the platen. I rang the little end-of-line bell.

I love computers and digital technology. I am fascinated by the powerful communication tools offered by the 21st century. But nothing beats a cool mechanical device. The sensuality adds to the creative process.

Writing on that machine — a few high school papers when my father wouldn’t let me on his IBM Correcting Selectric — was a physical endeavor with all the rewards of exercise. You swing fingers into the long throw of the keys, controlling the strength of a word through how hard you pounded the letters. The emotion of a word or line exploded into the act of typing.

Each line musically ended with a sweet ding and a gratifying swipe at the carriage return lever. Through the process your mind needed to stay three steps ahead of your fingers, plotting each word and paragraph in advance to avoid a retype of at least a page. When that page was done, you could melodramatically grab the paper and yank it out of the platen with a satisfying and final buzz of the ratchet.

Just over a year ago I pulled out the small portable Smith-Corona my father used in college. I thought my seven-year-old guests would be happily occupied banging on the keys and tangling the font the way I did. “Is this an old computer?” Zoe asked with a gasp of fascination.

In photography I get the same pleasure from pulling a dark slide out from in front of a fat sheet of film, or from cranking a film roll into a Rolleiflex, or from cocking the shutter of an old Flash-Supermatic leaf shutter. I listen to the soft trip of a Leica M3 at 1/60 second and savor the polished roll of the advance lever mechanics. The sense of beginning in those actions is so much more palpable than in the slip of a memory card into a slot and the tinny ping of a DSLR.

In a darkroom I still relish the feel of a roll winding onto the stainless-steel reels, the sour smell of the hypo, the suds of the Photoflo. Watching an image appear as I tip the corner of an amber-lit tray takes me instantly back to age 15, a basement darkroom, and the excitement of discovery.

But I am not a Luddite. I am a master’s student in Digital Media Studies at the University of Denver as well as a working digital photojournalist and photojournalism teacher. I find sensuality in the visual and aural output of the digital age and the elegance of its engineering. But that’s another post.

My message is only this: Remember to embrace the process of your work and find joy in it the way you find it in your images. As le maitre Henri Cartier-Bresson excitedly giggled and growled: